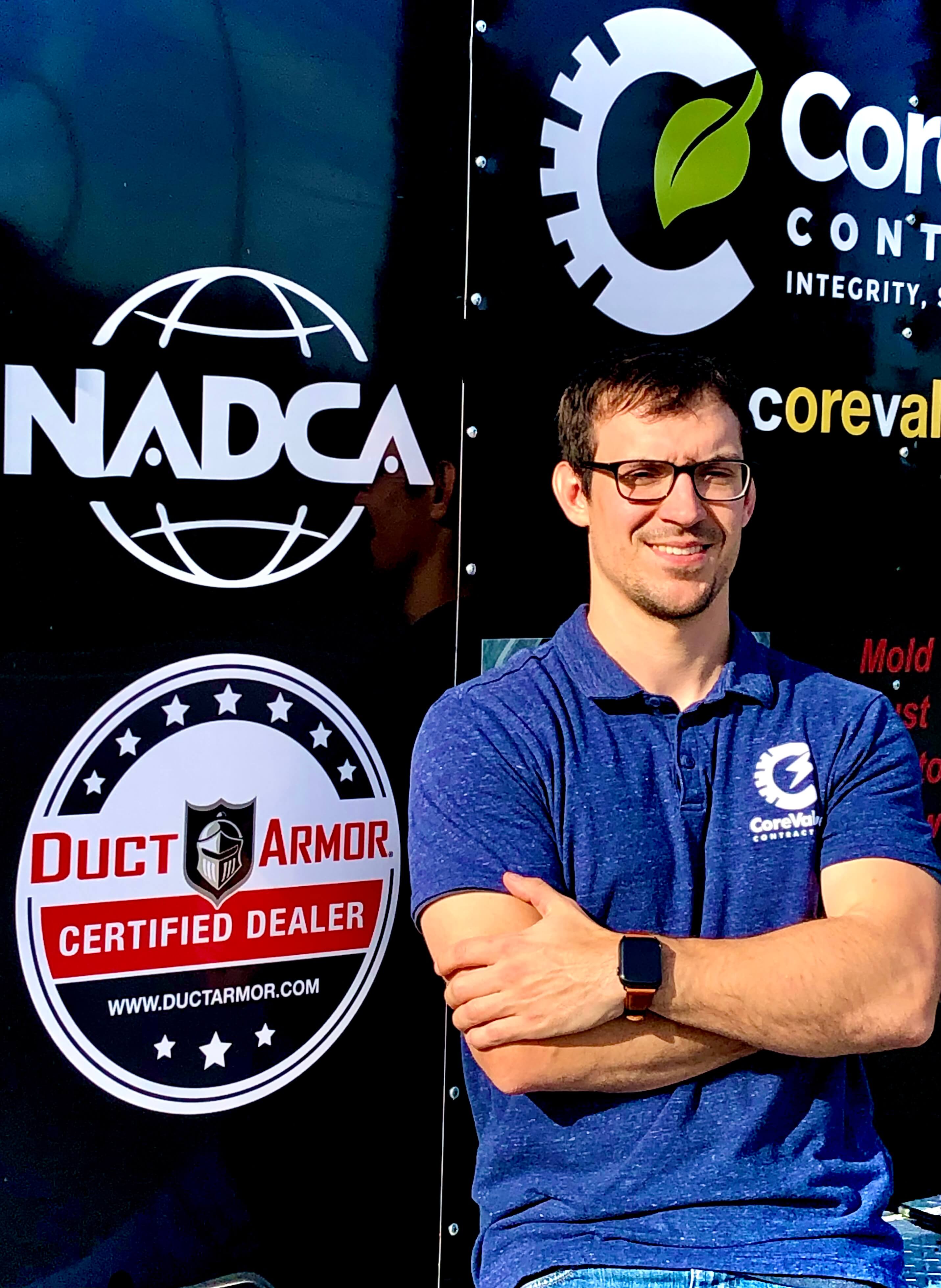 Before bringing Core Value Contracting to Lancaster, PA in 2019, his home was Ann Arbor, MI where he founded the company in 2017. Robby served over a decade in the US Air Force, spending 4 years on active duty, stationed at Sheppard AFB, TX and Ramstein AB, Germany. and then 6 years in the Michigan Air National Guard at Selfridge ANGB. Enlisting in 2007 and serving in a Civil Engineering Squadron, electrical division, Robby contributed to projects all over the world, in both the Middle East and humanitarian missions abroad, earning more than two-dozen awards and decorations. The tools and unique experienced gained from multiple overseas deployments and leading other men, prepared Robby for the challenges of shepherding a company and empowering those around him to model the same Core Value’s he gained from the military, which inspired the naming of Core Value Contracting.

Prior to founding Core Value, he worked for the Federal Aviation Administration, as a project lead for radar, automation and satellite technologies in SE Michigan. Before this, he was a commercial electrical contractor in Ann Arbor MI, and for the first 2 years after moving home from active duty, a proud IBEW lineman. Prior to joining the Air Force, he remodeled homes as a carpenter while attending college in Ann Arbor, with plans of becoming a history teacher, coaching wrestling and flipping houses in the summers.

During childhood he lived in Hobart, Indiana, growing up next door to his business partner, Mike Halloran. From a young age, they day-dreamt of one day building a company together. Having moved to Michigan in the early 2000’s, it was after the end of a 13 year relationship & marriage in 2017, when Robby reevaluated his long-term vision and chose to invest every blessing from life into establishing Core Value Contracting. Upon becoming the exclusive Pennsylvania Duct Armor dealer, he took the leap of faith and moved to Lancaster, Pennsylvania.

Robby is an active member of the community, involved with Christian Business Fellowship, Lancaster Young Professionals, Lancaster Road Runners Club, PRE West Chester and is a Freemason. He is a Christian and in his free time enjoys carpentry, fishing, playing guitar, the idea of fitness, and Notre Dame football.

As the contractor on record, Robby maintains all necessary licensing and certifications; in addition to several others including OSHA, electrical and mechanical contractor licenses. 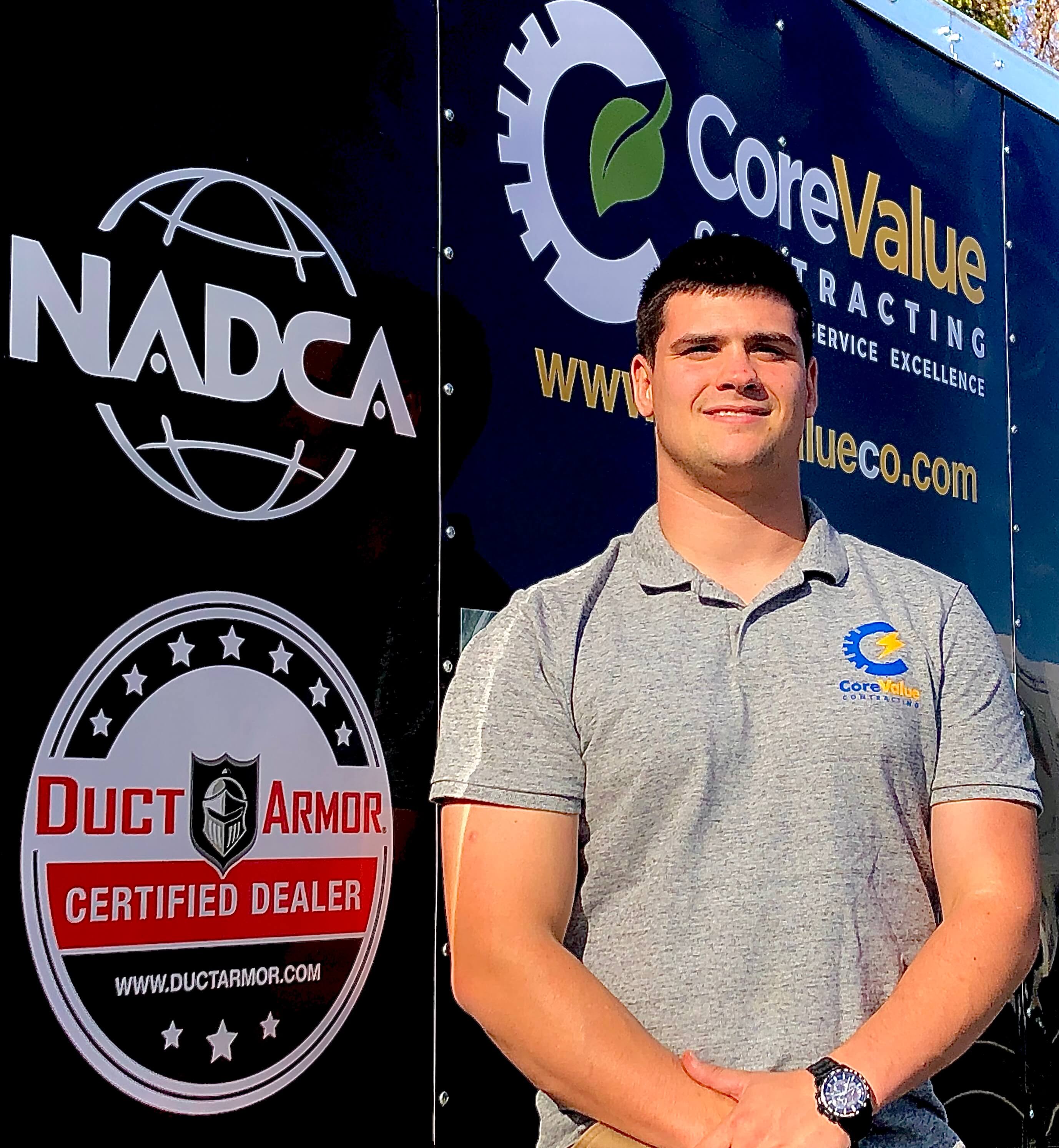 Before moving to Lancaster, PA in 2019, Mike lived in Indianapolis, IN. He ran his own general contracting company, InvestaBuild. Working with several realtors and investors on home renovations. He owned and managed this company for over a year before being offered the opportunity to join Core Value Contracting. Prior to general contracting, Mike worked as a plumber, in and around the Indianapolis area. After college, Mike worked for a startup logistical distribution company. The experience working for a small business was something he enjoyed, learning from the challenges associated with growing a company.

Mike attended Indiana University-Purdue University at Indianapolis, majoring in Mathematics, where he met his wife, Kelsie. Mike and Kelsie married in 2016 and have two daughters, Annalyse and Sophia. Mike grew up in Hobart, Indiana and in high school spent most of his time playing football and wrestling for the Brickies.

Mike is a Christian in addition to being a husband, father, and brother. In his spare time he enjoys spending time with family, working on home projects and watching the Green Bay Packers.

Contact Us
Previous
Next
"Nicest and most professional guys you'll ever meet. If you're reading this, hire them...period."
Dee T.York, PA
"It was great. They came in and did everything they said they were gonna do. They were very thorough. They did everyhting in the same day."
Ramsey C.Downingtown, PA
"Robby went out of his way to meet with us and give his honest opinion and resolution to our air problems! I’m really happy to have met him!"
Regina SmithRealtor
"Robby and his team did an amazing job coating the ducts in our slab. The air in our home is much cleaner and our house holds heat/air so much better. Robby replied to emails and phone calls right away and kept us informed during every step of this process. Very professional guys who were great with our loud and curious boys!​"
Becky H.lambertville, mi
"Right on time & the guys couldn't have been nicer!"
Brian L.Lancaster, PA
Previous
Next
Facebook Instagram Youtube Linkedin
Menu 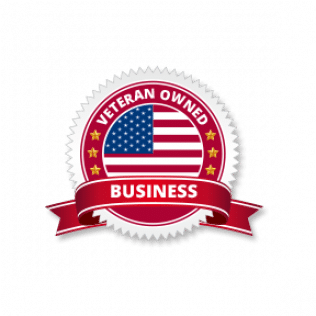